If this sounds like you, I cannot recommend Fixie strongly enough.

It's a low ceremony test framework that presents the minimum possible barrier to entry for the guilt driven tester/developer.

Fixie is so nice for a few reasons. Firstly it's self contained. After installing from NuGet, the Visual Studio test runner for Fixie is already set up.

This means you don't have to locate the correct package for your Visual Studio version. If you're lazy like me then you'll appreciate this time-saver.

To install from the package manager console use:

Or search "fixie" on the NuGet package manager.

The next point in its favour is your tests are just code. While MSTest and to some extent NUnit are an alphabetti spaghetti of attributes which challenge you to remember the difference between your [TestFixture] and [TestClass] attributes, Fixie requires no attributes to start working.

Legacy applications are a fact of life in software development. However well a piece of software starts and no matter how much care is taken to document it, as people leave and new people are assigned to look after it, knowledge about what the software does or how it's meant to work is lost.

For older code which was written before a time of TDD and testable architecture this creates a fear of change, both for a developer and for the business. Testing is time consuming and manual and the knowledge of what the expected inputs and outputs of the application are, are lost and changed as ownership of the application changes hands.

In his book Working Effectively with Legacy Code Michael Feathers outlines steps which can be taken inside the code to refactor it and start adding test coverage. Depending on the size of the codebase and the budgetary and time constraints it can be difficult to get very far with refactoring the codebase itself.

While automated tests should also be used for new software they can be just as, if not more, useful when it comes to legacy software. For example, the UI of a legacy application tends to be much more fixed than for a project currently undergoing development.

Automated UI tests for a web application can provide a useful time-saver and allow you to quickly cover the application with regression tests at a higher level.

One of the most popular tools for automated UI testing is Selenium. Selenium offers support for a range of languages, including .NET, Java, Ruby, etc. With Selenium you can quickly script interaction with different browsers, primarily Firefox but there are also drivers available for Internet Explorer, Google Chrome and Phantom.

While the concept of Business Driven Development (BDD) is orthogonal to automation testing, the two work well together.

Even though BDD is about more than just a diferent way of coding, the Gherkin style Given, When, Then syntax is a good fit for UI tests. Since these Gherkin requirements often represent the outcome the user is expecting to see when they use the application they tend to align more naturally with UI testing.

I haven't blogged in a while, simply because I've not thought of any interesting topics to blog about, hopefully something will come along sooner or later!

This extension aims to make sending code to hastebin (it's like a good version of PasteBin) from inside Visual Studio easier. Not that it could be much easier but it seemed like a fun way to learn Visual Studio extensibility. 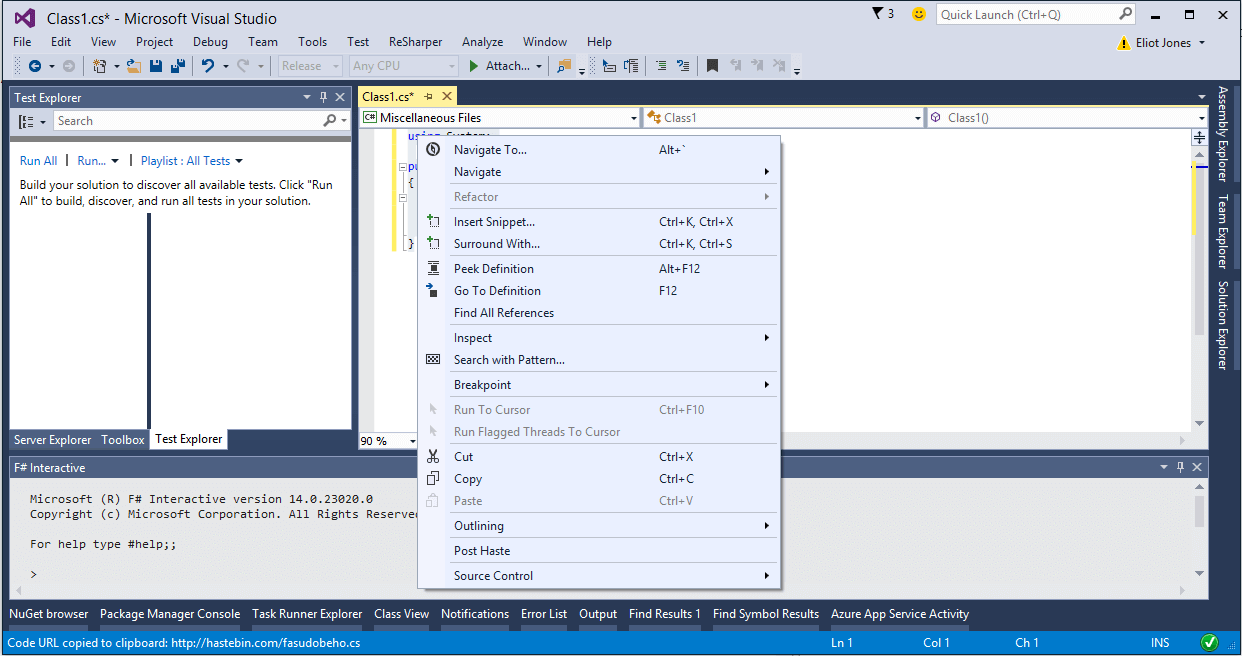