How it works: Selenium

I've done quite a bit of work with Selenium on and off, mainly for browser automation tests. There are many high quality official libraries for Selenium covering a range of languages. It's an amazing technology and a real joy to work with; however sometimes stuff can go wrong and it's useful to know what's going on under the hood in order to debug where the problem lies.

For this reason I present my very-probably-wrong guide to Selenium.

There are 3 components in code that interacts with Selenium (ignoring RemoteWebDriver use cases):

For each browser that supports Selenium, the browser vendor provides a "driver". This is usually a small executable (.exe) program tailored for a specific browser:

This driver is the part your code actually interacts with. The driver then communicates with the browser using whatever magic the vendors design. In order to change browsers while using the same code, the drivers expose interfaces/endpoints that implement the WebDriver specification.

Put simply, this means the drivers are a simple RESTful API.

To demonstrate this I'll use the ChromeDriver version 2.29 which is the latest version at the time of writing. Drivers can only talk to the versions of the browser they are compatible with. In this demo I'm running Chrome on version 58.

Once you have downloaded the driver you get a simple program called chromedriver.exe. If you double click the exe it launches a console window with some information about the driver version you are running and what port it's listening on: 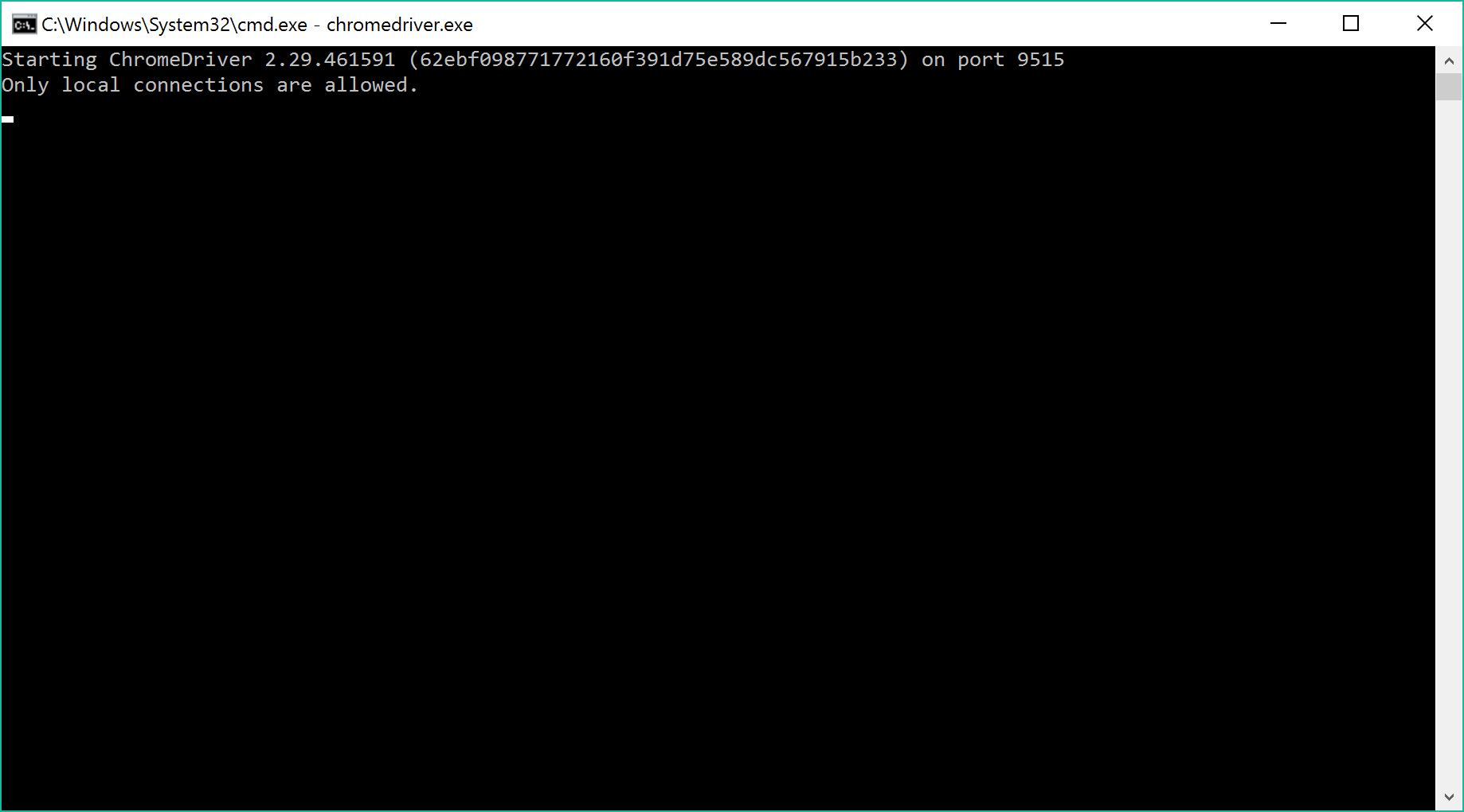 On start-up the driver logs the message:

This tells us we can access the driver at the URL http://localhost:9515.

Now that the driver is listening we can ask it to launch a browser instance for us. To do this we need to send an HTTP POST request to the following URL:

This method is defined in the specification. We also need to provide some extra information about the capabilities we want from the browser instance. To do this we pass JSON in the request body.

For a blank set of capabilities the JSON looks like this:

To interact with the driver using HTTP requests I am going to use PowerShell since it's installed on all Windows systems. You can use Postman or Fiddler or curl or whichever client you want.

After sending the last line, a new browser window should open. If you don't see the window try typing $response.value into the PowerShell window and hitting enter. This should contain a message telling you what went wrong.

This window has a unique SessionId we use to interact with it specifically. We can display this id and assign it to a variable using PowerShell:

Now we have a blank window, the next step is to navigate to a web page. From the spec we need to hit the URL http://localhost:9515/session/{session id}/url where {session id} is the actual id of the session we created (and helpfully stored in the $sessionId variable). We also need to tell the driver what URL we want to navigate to. Again we provide this information in the request body as JSON:

To achieve this in PowerShell we do the following:

Hopefully this shows you that the Selenium interaction that occurs when your code uses a library for Selenium is actually (fairly) simple. The complicated and magic part happens when the driver talks to the browser.

Some key parts which can go wrong are:

Of these, the last item is the absolute, 99.9%, most likely culprit for any bug. Followed by a version mismatch between any 2 of the components. Using your knowledge of how to interact with the driver without any intermediate code you can now perform an extra check to verify where the problem likely lies.