Out of the different Source Control options Git is definitely the one most worth learning, however, it's also one of the most confusing.

With that in mind I'm going to add to the crowded market of "Git beginners" tutorials. Hopefully given that I can still remember the struggle of learning it and that my current level of understanding probably rates as "simpleton" this will be a useful tutorial.

I'm going to be writing for Git on Windows and will try to assume no existing knowledge beyond knowing what a file and folder is. Because of this I'm going to make a lot of oversimplifications.

After using the installation defaults, you're done.

Since using one of the nice user interfaces will only shield you from the true horror, it's best to start using console.

Search for "Git Bash" in your start menu or find it in the install location. Once launched you should see this window: 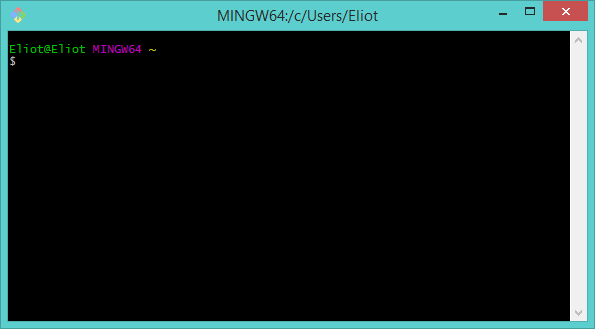 Depending on how comfortable you are with Window's command prompt you're either happy with what's going on, or the panic is already setting in.

The dollar sign "$" is the prompt, it's asking you to write something on that line and when you hit enter it will run your command.

Let's start by working out where we are. Type the following command at the prompt:

And hit enter. You should see something like the following result: 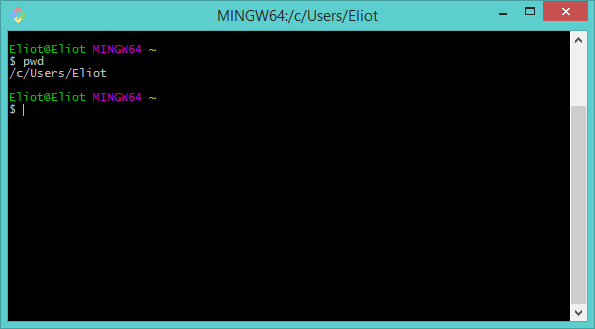 By using pwd (print working directory) we're able to see that our current command prompt (Bash) is pointing at "C:\Users\Eliot" (or your equivalent)

Since I'm exceedingly lazy I like to store all my code directly on my C drive, rather than in my Users folder. I have a folder located at C:\code (for the sake of the tutorial you should create one too).

Your console output should look similar to this: 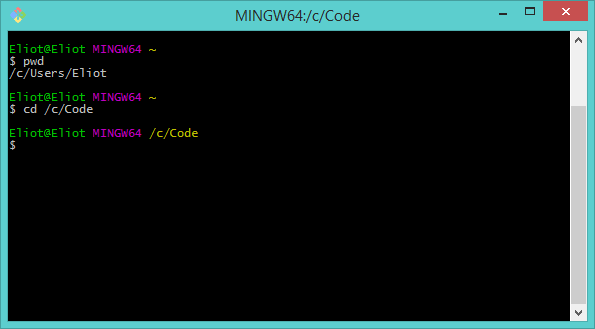 Notice how the yellow tilde character "~" above the prompt has changed to be "/c/code"? From this we learn that the yellow text shows us our currently active folder. To verify this you could type pwd and check it prints out "/c/code".

This also tells us that the "~" character has a special meaning. It corresponds to the base folder of the user's environment, mine is located at "C:\Users\Eliot".

So far we've not actually used any Git commands, these have been Bash commands. Git commands can are run through Bash.

If you're still here after that terrible pun, it's time to actually do something with Git.

Let's create some code we might want to store under source control. For this demo I'm just going to make a project containing some static HTML and css.

In a new folder located at C:\code\my-website I made an html page and some css (index.html and site.css). Create the folder called my-website now and add these files. You can leave them empty for now if you don't know how to write html or css: 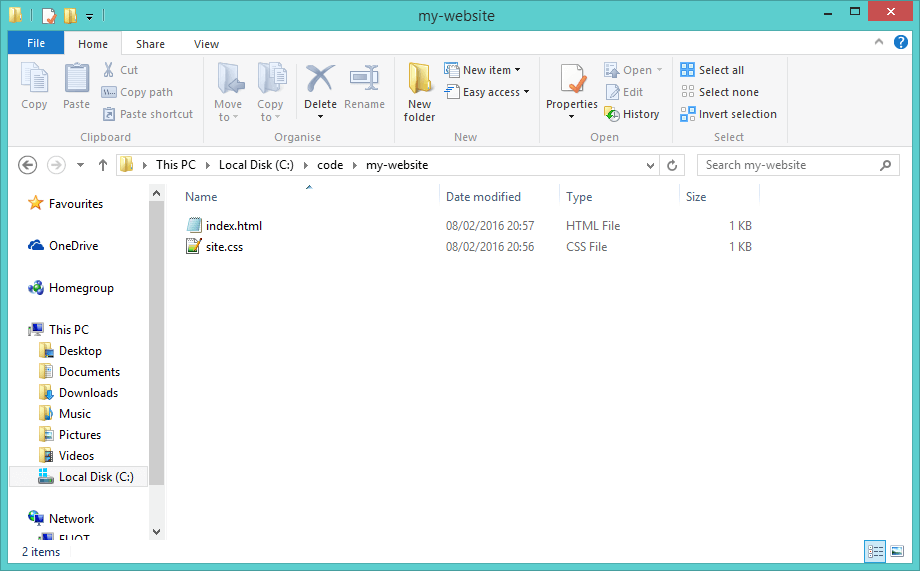 To prepare to use our first Git command, move into this folder using Bash. If your current directory is C:\code you can type:

Or to get to it from anywhere:

You should see the following output:

This is how we create a Git repository.

A Git repository is a basically a folder which is under source control.

There's a new bit of information in the line above the prompt in Git Bash. After the current active path there's the word "master" in brackets. This is the current branch name.

Don't worry too much about branches for now, we'll get to them in a bit.

All we have to do to make our repository active in Bash is navigate to the folder containing the repository (or any folders under that folder). If we use the cd command to navigate up a level and then back into our my-website folder, we see the branch name disappears then reappears from the text above the prompt. The branch name only shows when we're in a repository. Try these commands:

For an illustration of what you should see, look at the screenshot below: 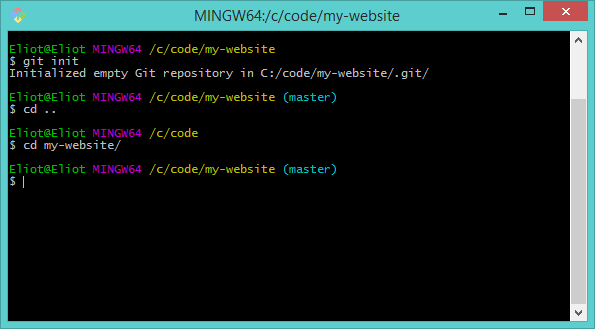 We've know that the Bash console shows us which branch is currently active when we're in a repository. Another way to get this information is the command:

As well as printing the branch name this command also prints the status of files in the folder (repository):

This tells us we have 2 untracked files. An untracked file is one which isn't under source control. If we delete it, or mess it up in some way, Git isn't going to help us. With that in mind let's track it. As the output from git status helpfully suggests, we can use the following command:

If you type just that statement you get the following output:

The argument to git add is the path to the file or files you want to track. The '.' dot means "all currently untracked files". Let's use the following two commands to add the files and then check the status: 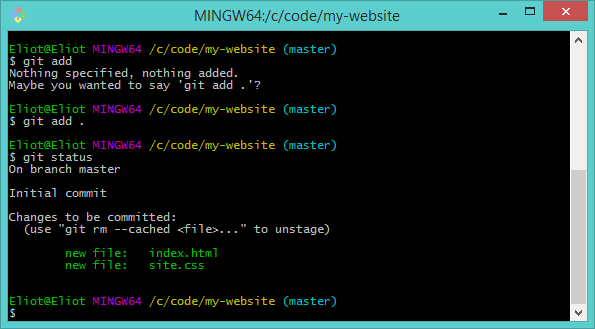 Our changes are now "staged" and we're ready to commit them. A commit is a snapshot of how all files in the project looked at a particular point in time. It's a bit like if we copied our project folder and renamed it "my-website-20160209".

Once you have a commit you can always go back to how the files looked when you made that commit.

This is an exciting moment for us, the first commit in our repository! The simplest way to make a commit is with the following command:

The -m option tells Git we will provide the message for our commit along with the command. This message can be anything; "toast", "tire iron", "updated tests to use mocks". It's just a friendly label we can use to remind people and ourselves what we did between this commit and the last one.

Now if we use git status we can see that nothing has changed in our repository since we made our commit.

Now we've made a commit how do we view the commits in our repository? The answer is: 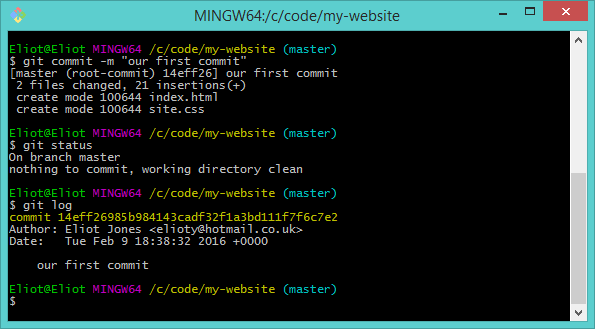 The log lists all the commits in our repository with the latest at the top of the log. The long yellow word containing both numbers and letters is the hash of our commit. This is a unique bit of text which identifies our commit for Git commands.

From Logs to Branches

I mentioned earlier that the "master" in brackets tells us which branch we're on. Now we've got our first commit it's time to learn about branches.

A branch is a way of having multiple different sets of the same code which are changing in different ways. For example if you have a text file (file.txt) that both you and your friend Eric are editing, you might share a folder containing "file.txt, my-file.txt, eric-file.txt". This way you can work on your file, Eric can work on his and neither of you are going to irreversibly mess up the original file.

Every Git repository starts with a branch called "master". That's why, when you used the git init command, the active branch name was "master".

To see every branch in your repository you can type:

The -a option tells Git to list all branches. The output of this command is:

The asterisk '*' shows which branch is currently active.

Now let's assume we want to change our files, but these are experimental css changes which we might throw away. To create a new branch:

The -b option means this command will create a new branch, rather than moving between existing branches.

If you type git branch -a now, you'll see that there are two branches and the branch css-changes is active. The text above the bash prompt will also have updated: 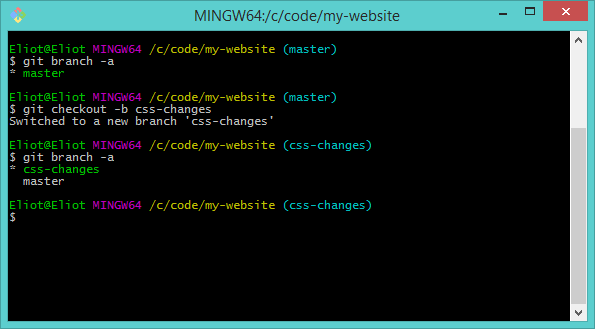 If we use git log to check our commit history we can see it's the same as master. Creating a new branch from another branch will bring all the commits from the source branch.

Now to make some changes to a file update site.css to add some styles to it, for instance:

Once you save these changes in your editor, type git status to see what's going on.

Git has detected that our site.css has changed. We need to use the git add command again to be able to commit the file. Use the following 2 commands:

When we type git log we now see 2 commits in this branch.

After making this commit let's also change the index.html file. I added the line:

Now this was a mistake, iframes are bad. How do we undo this? If you type git status the output should say something like:

One option is to use git checkout -- index.html which will reset the file. However we could also reset everything to be like the last commit.

In order to reset our branch to be like the last commit we can (unsurprisingly) use git reset. First you need the hash of the commit you want to return to. Use git log and select the first 6-9 characters of the hash of the top commit in the log. For example my output is:

Your commit hashes will be different, select the first part of the top one. In my case the text I want is "dd1f49b". Next we can use a hard reset to get our branch looking like it was at the time of that commit:

Note that the hard reset command is dangerous and you could lose work, it's generally better to use git checkout -- <file>.

Now if we type git status we can see that we have no changes in our branch.

If we illustrate commits with circles and branches with lines, then our current branches and commits look like this: 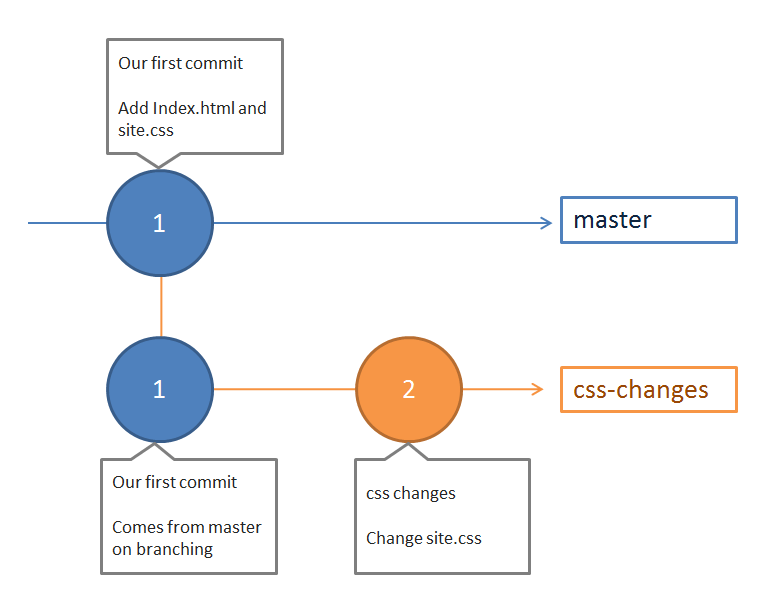 The beauty of Git is we can go back to master branch and interact with our code as it looked before we made the commit to change the site css in our css-changes branch. To do this we don't even need to do a hard reset. Use the command:

This change your active branch and set your active view of the repository back to how the code looked in the master branch.

Now we've verified we're happy with the code in our css-changes branch it's time to merge it into master. Generally you want to reserve master for completed "shippable" code. This means you merge into master when a commit (or series of commits) is ready to be used/deployed/released.

Given our current active branch is master all we have to do to complete the merge is enter the command: 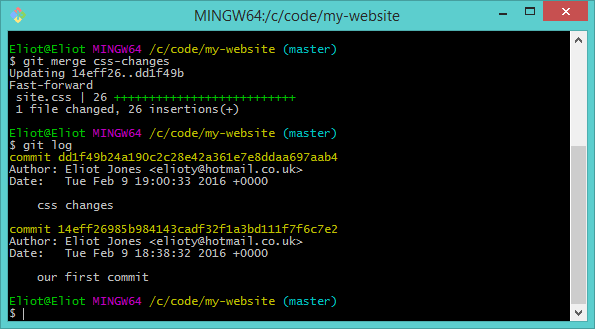 The merge operation git merge <branch> will transfer any commits with different hashes from the branch passed as the argument to the currently active branch.

That concludes this post. In the next post we'll take a look at working with remotes, using GitHub as our example and also rebasing, merge-conflicts and more.

Feel free to point out any terrible errors or missing information in the comments.